Do we already have group filtering and sorting on our roadmap? If not, we should. I'm thinking that something like what you developed for profile filtering could be usefully applied to groups, as well. I'd also like to see us develop group tagging, so that we have metadata on groups to filter through, which I know we've talked about.

The only data we have to sort by is already implemented (alphabetical, most members, most recently active, most recently created), and we don't have any structured data at all to filter by. So this ticket is only possible when something like #253.

In any case, building a taxonomy system for groups is a mammoth undertaking, so I'm proposing we find a milestone for it other than 1.4.

What about filtering by public/private? That's a big one for me -- sometimes, I want to point someone to a group, but only want to show them public groups.

We have public/private data, yes. But I'm wary of just implementing anything without first having a go-round of how the UI should look.

Matt, can you tell me a bit more about your vision for this and I can do a wireframe.

I'm thinking of this as a folksonomy rather than a taxonomy, with the idea being that group admins can assign tags to their groups that will allow them to be filtered and sorted more easily. "digitalhumanities" might be a use case. Right now, one can search through groups to see what groups have dh in their title/description, but it's likely that, say, the group devoted to "Interactive Technology and Pedagogy" won't show up in that search because the words don't appear. But if the admins of the ITP group were able to add "digitalhumanities" as a tag, it could be found more easily.

Of course, using a folksonomic approach makes the task of filtering/sorting more complicated, since we wouldn't want to, say, populate a drop-down with folksonomic terms (it could wind up being a very long menu, with terms like "digitalhumanities" and "digital humanities" appearing as two separate entries). Not sure what the best way to go about this would be, but perhaps adding this new tag field to groups and then having the search function search it would work.

On the other hand, that's not functionally too much different than the existing profile field, and maybe we should consider a taxonomic approach. I wonder whether we should add some librarians to this ticket, so I'm adding Maura as a watcher to give us her thoughts.

Updated by Chris Stein over 8 years ago

I feel like this should get feedback from the larger group since it should reflect our larger agenda on how we expect people to think about the relationships between groups and in some ways categories of thought and activity on the Commons should be organized.

Updated by Matt Gold over 8 years ago

Updated by Boone Gorges about 8 years ago

Updated by Boone Gorges over 7 years ago

Worth pursing, but there's a fair amount of work that needs to be done to describe the workflows, as well as the various ways in which group tags would be displayed. Maybe we can look at this in an upcoming release.

Updated by Boone Gorges about 7 years ago

Updated by Matt Gold over 5 years ago

Per discussion on the CBOX-OL project, let's use the work we've done on the Group Categories plugin on that project to bring this over to the CAC

Updated by Matt Gold about 5 years ago

Hi All -- we were discussing ways to identify/locate teaching groups/sites on the Commons in a meeting today, and this is the ticket I think that comes closest to this. Boone, is the CBOX-OL work discussed above on the Group Categories plugin ready to move over to the CAC, or at least to start moving in that direction?

Also, Luke mentioned a blog metadata plugin that we might think about for categorizing blogs. Luke, can you please share that info here or point to another ticket where we've been discussing that? thank you.

Updated by Luke Waltzer about 5 years ago

Here's the ticket where we discussed it -- https://redmine.gc.cuny.edu/issues/6078. Seems like there's some work waiting for me there...

I'll take time in the next week to sketch the questions that need to be answered before we can move forward with this. This'll include potential integration with blog categories #6078.

Updated by Matt Gold about 5 years ago

I started working on a first-pass integration of the group category plugin on the OpenLab with the Commons, but I ran into a couple of technical hurdles. Since the task will be non-trivial, I'm going to spell out some of the questions using screenshots and info from the OpenLab.

a. Integration into directories 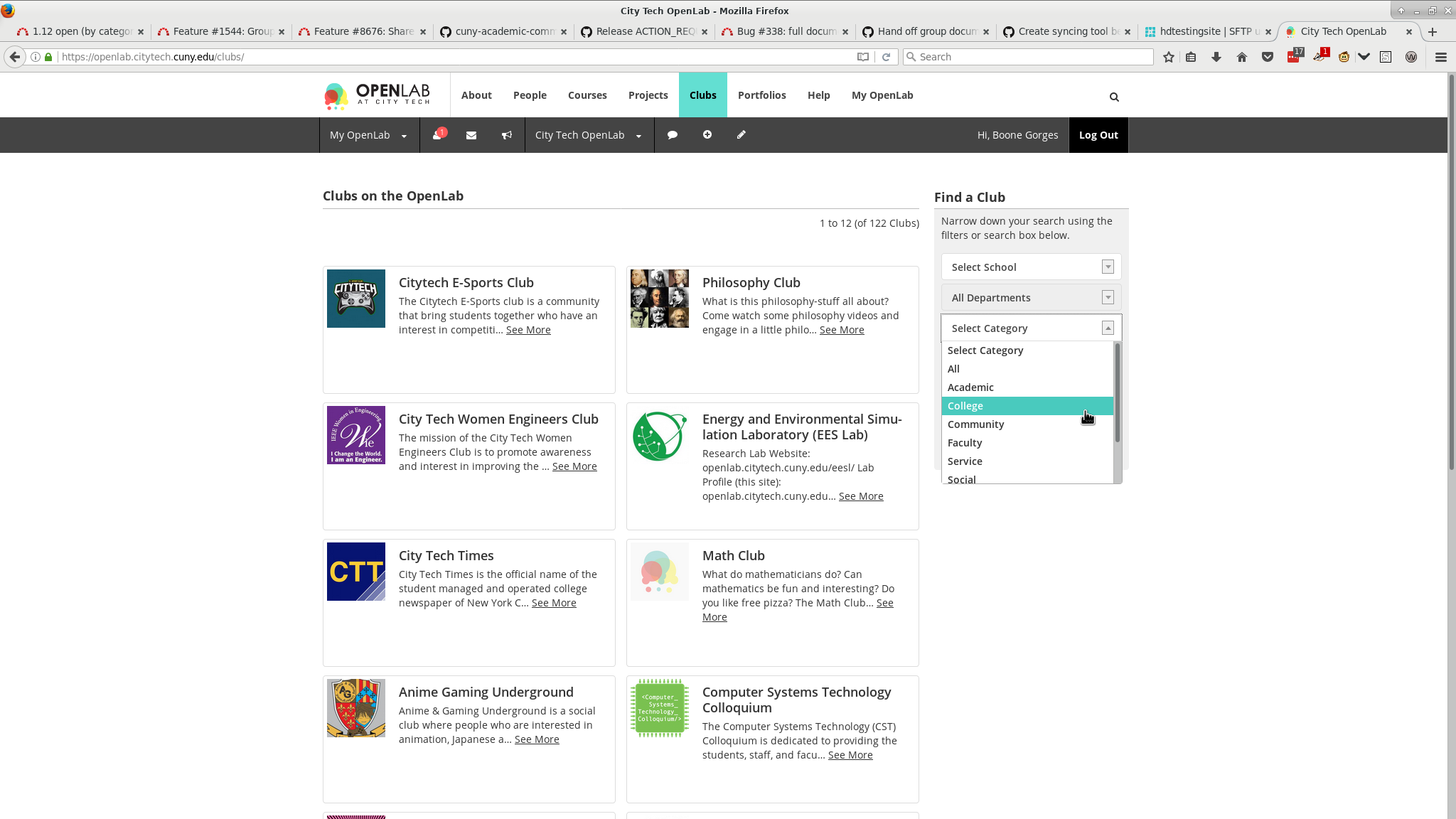 The OpenLab has a sidebar on group directories where you can filter/search in a unified interface. We don't currently have anything like this on the Commons: our "Order by" dropdown is in a separate space from the search UI. Assuming we want to allow for browsing/drilling-down by category, we'd need to have a selector somewhere in the directory interface.

b. Appearance on group pages 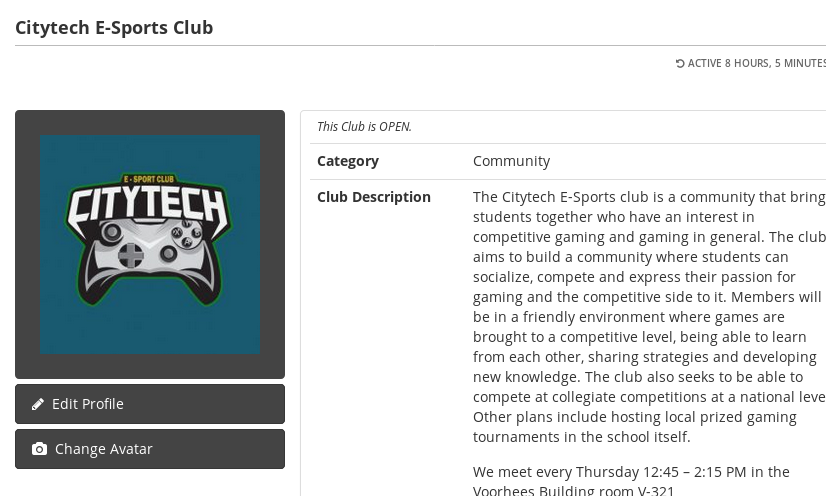 The OpenLab has a pretty heavily-customized interface for groups, which includes a tabular display of group info (like description, admins, etc). This is where the category appears. We'll have to come up with a place to show this data. And given that we are already putting more content into this space during the 1.12 release (see https://redmine.gc.cuny.edu/attachments/download/6450/Screenshot_2017-09-27_15-03-28.png), we might want to consider a slightly broader rethink of how group headers look and/or how their metadata is displayed.

In addition, the OpenLab doesn't link the category name group headers, but I think it's a decent idea for the category name to be linked to a group directory, filtered by that category. Not critical, but something to think about.

c. Management of categories on a per-group basis

When editing/creating a group, admins can choose from a pre-populated list of categories. They can pick more than one, but there's no free-entry space for them to create their own categories (it's a controlled taxonomy). The OpenLab has a totally customized interface for group creation/editing, so we'd need to figure out (a) whether we like the checkbox interface shown in the screenshot, and (b) where it should go (ie, in a new group creation step/tab, called 'Categories', or perhaps appended to an existing step)

This is a screenshot of how network admins set up the categories. I think we can pretty much use this one as-is.

In the future, we want to introduce blog categories as well #6078, and ideally, blog categories would somehow integrate with group categories. (Maybe they'd be the same thing?) The way that this plugin is built will make it somewhat complicated to make this integration happen - though, to be fair, there's no obvious way to make it not complicated. It's likely to complicate the implementation if we try to do it all at once, but we might want to at least talk about how site categorization would work in theory, to be sure that the decisions we make about group categorization don't preclude future integration.

As a side note: implemented correctly, this would be a really valuable contribution, either to BuddyPress itself or as a standalone plugin. I'd likely want to rethink some of the data storage mechanisms if we were to move in that direction (especially BP core) at some future date.

Let's talk about a broader vision for what these categories should be accomplishing, especially alongside #6078, and then we can start drilling down to talk about how some of the OpenLab interfaces described above can be implemented on the Commons.

This is a possible big feature for the 1.13 release, alongside onboarding stuff. Let's discuss during an upcoming meeting.

Updated by Boone Gorges over 4 years ago

Updated by Boone Gorges about 4 years ago

Updated by Boone Gorges about 4 years ago

There may be some overlap between this ticket and the "primary purpose" field being introduced in #10987. This overlap is good insofar as it provides some of the sortable/filterable metadata asked for as part of this ticket. It's bad insofar as it threatens to confuse and cross purposes between the very limited "primary purpose" and the more general concept of "category" or "tag". Let's sort the "purpose" out first, and then figure out how what's requested here - say, something more folksonomical? - might fit alongside.